Here is a graphic showing the batters with the highest average exit velocity on home runs. A batter needed a minimum of 25 home runs to make the list. I was somewhat surprised to see Gary Sanchez at the top of the list. I have seen him blister some line drives but the home runs I’ve seen him hit would not make me think he would top this list. 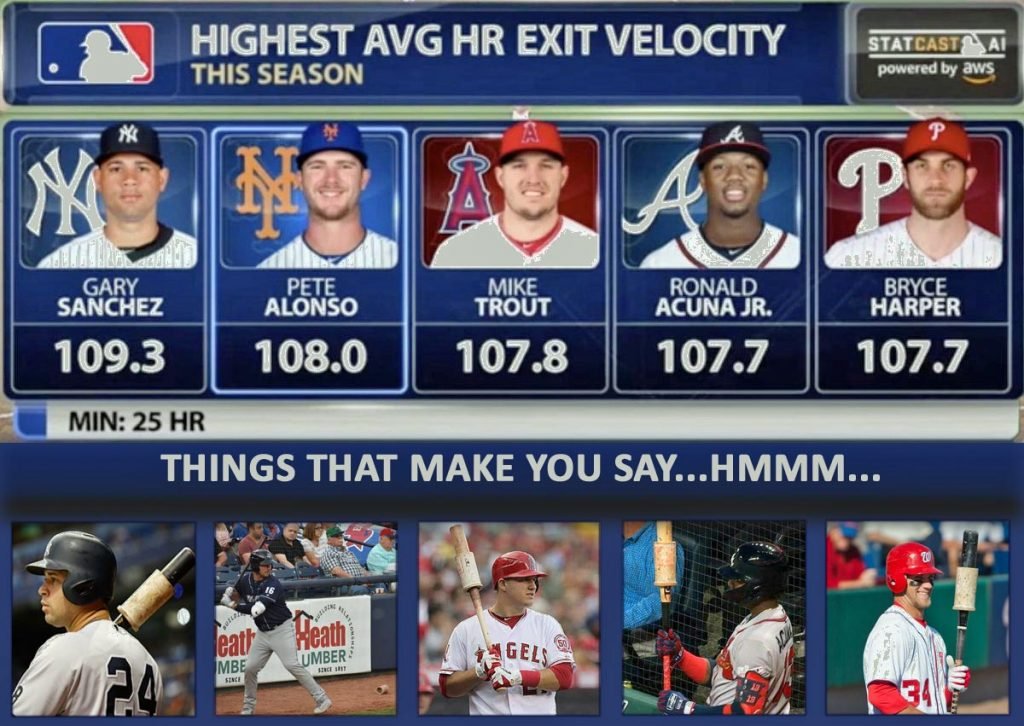 You probably figured Mike Trout would be on the list of highest average exit velocities. Likewise, I knew Pete Alonso would be on the list as he was on my fantasy team and I have seen some of his impressive moon shots. Also, Alonso won the home run derby, proof he can put some hurt on the baseball.

I don’t know much about Ronald Acuna, Jr.’s exit velocities as I don’t get a chance to see many Braves games on TV. It’s not like the old days when TBS had every Braves game on cable TV nationwide. (I had to look it up—TBS dropped nationwide Braves coverage after the 2007 season. Wow, I thought it was more like 5 or 6 years ago, not 12 years ago.)

Bryce Harper? I never would have guessed he would be on the list. Sure, he cranks some prodigious home runs now and again, I just didn’t think he’d be consistently in the highest exit velocities.

Who Wasn’t on the List (but Crush the Ball)?

I list some guys below that I figured would be on the list for sure. I had to figure out why they weren’t on the list by looking up the number of home runs they had or other reasons why they didn’t make it. Remember, the criteria is highest average exit velocity on home runs and not merely highest exit velocity on a batted ball.

In fact, the top four hardest hit balls as far as highest exit velocity belongs to Giancarlo Stanton (#1 and #3) and Vladimir Guerrero (#2 and #4.)

Here is Vlad Guerrero hitting the ball 366 feet at 118 mph…and getting only a single.

What do These Batters Use in the On Deck Circle?

I added a little more information to the graphic by showing the on deck warm-up weight used by each of the top batters in highest average exit velocity. Once again we see that the best power hitters in baseball use the Pow’r Wrap bat weight. Of course, it’s just a small part of their training, but IT IS a part of their training. They know that faster bat speed means higher exit velocities on batted balls and that leads to more home runs. It seems to be working for these guys. If you’re a serious ballplayer maybe you should make the Pow’r Wrap a part of your training routine.